~~~
Day’s Verse:
Don’t lose your grip on Love and Loyalty.
Tie them around your neck; carve their initials on your heart.
Earn a reputation for living well
in God’s eyes and the eyes of the people.
Proverbs 3:3-4
~~~

Today I rode to work with this…er…device Bungee-corded to my Xtracycle. 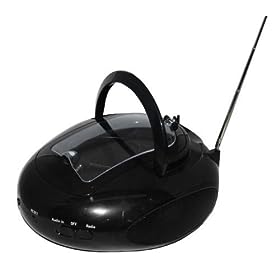 It’s a radio (clearly) with an iPod attachment, pretty much the simplest imaginable speaker system. It cost $16 including shipping and handling on Amazon, which is the exact price I would want to pay for a radio/iPod player I intend to strap to the back of my bike. I don’t think even the Playskool tape player I had when I was little was cheaper than this off-brand, made-in-Malaysian-sweat-shops-by-workers-paid-pennies-a-day radio.

But it works. I tuned it to NPR, hoping to catch Morning Edition. I’m pretty sure Morning Edition was on — I think I caught snippets of it — but even with the radio turned all the way up I mostly heard “whoooosssshhhhh” as wind went by my ears and “VRRRROOOOMMMMMM” as cars passed me. In lull moments, though, I sometimes heard phrases wafting behind me: “…donkeys carrying poll boxes in Afghanistan…” “…”…crazy or crazy like a fox to start a small business in this economy…” “…town hall meetings on healthcare reform…” “…humid with lows in the low 70s…” “…nonprofits like WGBH rely on your donations…”

Because it cost $9.99, the radio just stopped playing twice on my ride. It resumed when I went over bumps or when I turned it off and back on again. It only has a Scan button, no official radio station setter, but handily enough WGBH is the first station it picks up at our apartment. When I turned the radio on in Shrewsbury, it picked up some station broadcasting what sounded like waltzes.

If I wanted to try to set the station, I could try hitting the Scan button, but I have my doubts on whether that would actually work or not. A Radio/Off/iPod slide selector and a volume knob comprise the only other controls. It takes 4 AA batteries, of which we happily have an abundance of rechargeable ones thanks to my previous camera, or I could plug it in — it has a AC port, but I would have to supply my own cord.

This afternoon I will test out the iPod portion of its operation. I expect it will have the same “quality” sound as the radio did this morning. Fortunately, I bought it to be cheap traveling music, and it certainly fulfills that function most adequately. By the way, don’t take my lukewarm enthusiasm about this radio as lack of enthusiasm for the experience — I’m having fun with bringing noise with me, and I’m really looking forward to using it on the bike paths. Music for everybody!