I love gears on my bike. I’d say I’m, if not gears’ biggest fan, close to it. This probably has to do with the fact that I like hills and I like my knees, and prefer to not have the former destroy the latter (as is not uncommon with singlespeed and fixed-gear riders). Plus I just shift a lot, I guess to keep my cadence pretty regular. I don’t use a heart rate monitor or power meter, so I shift in response to how my legs feel. Novel!

So today Dad and I did the Flying Wheels Summer Century, as we do most years. Last year, I squeaked in with a just over 20-mph pace (that’s a sub-5-hour century) — a big accomplishment for me! This year, the route completely changed, but Dad wanted to aim for that same goal again. I wasn’t sanguine about our odds, given our pace but figured we could give it a shot.

Dad and I rode down there and it was a beautiful morning, with mist in Sammamish Valley and Mt. Rainier lit by the rising sun.

Thanks to some pretty speedy people in the group who pulled us along quite briskly, we actually were doing great for the first 64 miles — at that point, I had a 20.5 mph average. Only 40 miles left! We can do it! …Except that at 64 miles, my rear derailleur broke. The first 15 miles or so I thought it was a broken shift cable, which would be a bummer but easily fixable. Maybe not fixable by the rest-stop mechanic, but definitely a quick fix by my bike shop.

So that first 15 or 20 miles I rode with a two-speed: The big and small chainrings. We were able to yoink my rear derailleur so the chain was kind of mid-cassette and I could maintain an decent pace. Except that the derailleur kept shifting down, so I went slower and slower until I stopped to yoink it back again. But that’s when it was clear our 20-mph goal was going out the window. Dad heroically stayed with me, while the remainder of our group rode on (this is the difference between friends and family on a bike ride).

At mile 85, there was a rest stop. That’s when the truly bad news came out: My cable was fine. The tiny titanium spring inside the derailleur that keeps it, well, springing… broke. This meant: (a) Time for a new derailleur ($300); and (b) We were going to have to do something drastic to keep my riding for the next 30 miles. This is what we did: 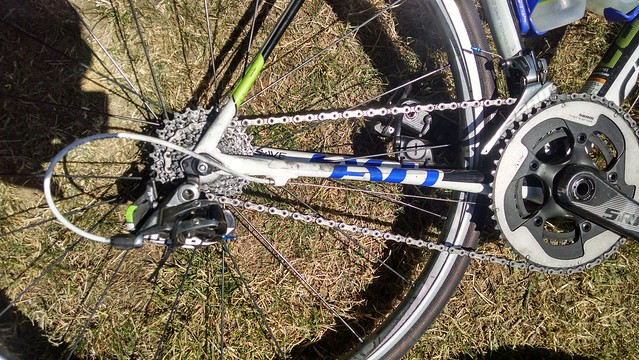 In case it’s hard to see, let me describe it: The mechanic, one heroic guy named Mike from Pacific Bike & Ski, shortened my (brand-new $50) chain into a single-speed chain. Now I couldn’t shift in the front or the back, but my chain wasn’t going anywhere. I could finish the ride… on my singlespeed. I had him put it in the big chainring, a 50; and it ended up in a middle cog, maybe a 15-tooth cog.

I’ll summarize the rest of the ride by saying that the first section I went pretty slow because I was getting used to having no gears. Also, at first, the chain kept jumping around all up and down the cassette, until it finally settled into whatever cog it fit. Then it stayed in place the rest of the ride. The remainder of the ride involved some hills, and boy did I wish I had some gears. But on the bright side, I rode up most of the hills really fast, since it was either do that or tip over. Which tells me that maybe I should work harder on some of the hills, huh?

Dad and I split up at the very end, when he needed to stop and I needed to just keep going (starting again from a stop was tough with just the one gear). I found some people to wheelsuck the last 10 miles and we were doing great… until a cop pulled us over 1/4 of a mile from the end for running the stop signs on the road through Marymoor. Which we totally were doing. Us, and all 4,000 other bicyclists on the ride. But thank goodness he just gave us a talking-to and let us go without ticketing us. So we finished, conscientiously stopping at the one stop sign between us and the end. Bah!

Overall, I’m proud of the 19.5-mph average we eked out, especially given that it was just me and Dad that last 40 miles.

Then Dad and I rode home into a headwind uphill and the last little bump up by the freeway overpass felt just like the last mile up Haleakala: Headwind, and me standing with no more gears and legs totally burned up.

A 125-mile day. Good times. Thanks to Ian for making it all possible (including the pending derailleur replacement).