Yesterday/today were Benji’s last days at Bucky Beaver Preschool. I hedge a bit because Thursday was his official last day, and he ate his “end of the school year Popsicle” on Thursday. But all the T/Th kids were invited to come for an hour on Friday to watch a magician perform. We went to that, which makes today kind of the last day, too. So, Thursday first. 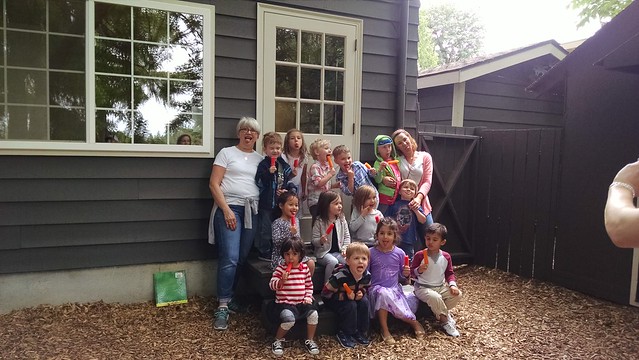 In case it wasn’t clear, this was the silly picture of the Tuesday/Thursday class, comprising mostly the younger kids. Mommies got to come early and eat a special Popsicle; when that was done, most of the kids played, but Benji gave me a comprehensive tour of the school, including his favorite outside toy, the climbing area: 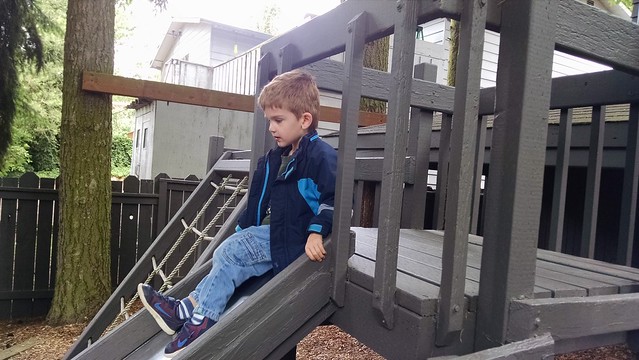 Alas, the interior was pretty much a bare, neutral room since Molly had to sell the house and get rid of all the preschool decorations and equipment in the process. I feel that the biggest loss was the really amazing kid-sized lofts built to give four little discrete areas for a store, a house, a coloring area, and something else I’ve forgotten. The lofts, very sturdy built-in furniture, were ripped out, as were all the toy/storage shelves that had previously lined the walls. Truly agonizing, even though Molly’s retirement is a happy event, to see 30+ years of accumulated preschool decorations and equipment disposed of. Guess Molly isn’t the sentimental type, or she’s found a way to keep mementos that don’t take up an entire downstairs.

But, on the bright side, filed under “get rid of all the preschool equipment,” is this: We inherited the train room carpet. They were going to take it to Goodwill, because nobody wanted it. Well, WE wanted it! Yesterday, our library looked like this: 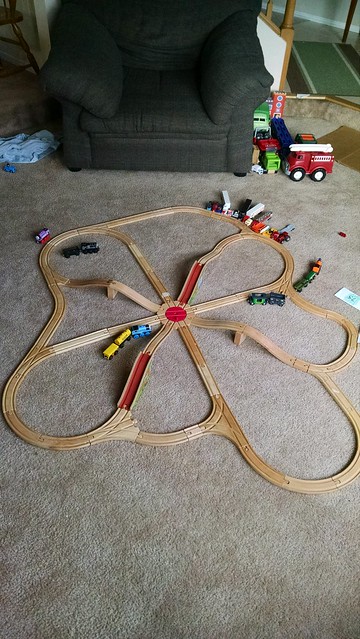 Today, after some heavy lifting and vacuuming on my part, it looks like this: 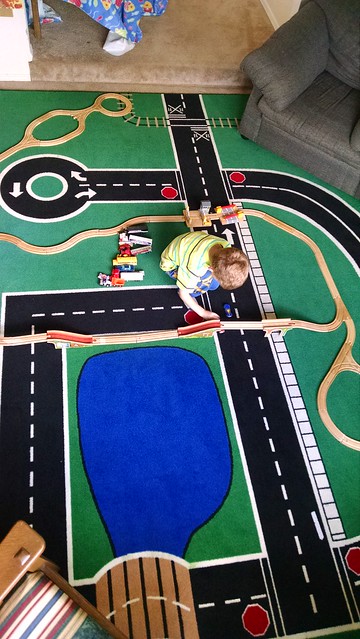 Benji spent all afternoon doing train/car races, driving our cars on the roads, and humming/singing made-up theme music to himself when he wasn’t narrating his vehicular activity. It was a pretty tight fit, even in the library, but I’m glad it worked out. This carpet will be much appreciated here.

Where was Benji while I did all that lifting and vacuuming? Because let’s be honest; he would’ve been freaking out to see me demolish our previous, super-cool arachnidaceous track.

Funny thing… He was back at Bucky Beaver watching a magician. Yep, a magician for preschoolers. Lucky for me, they started late, so I got to watch the last 20 minutes or so of the show. 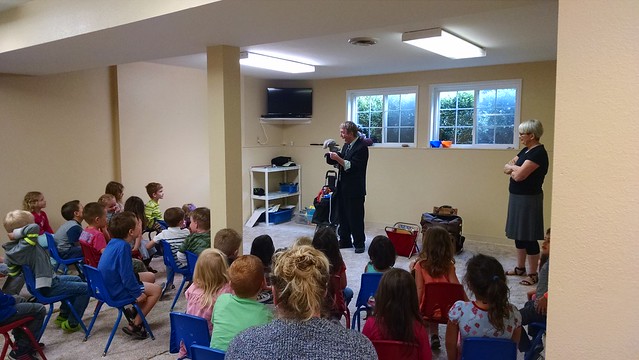 This guy, Kirk Charles, was wonderful. He did tricks that were fun, but his routine was so perfectly age-appropriate for these kids, they followed right along and were amazed without it being far beyond their understanding. Benji literally peed his pants when he saw the first trick (and had to borrow a spare pair for the rest of the show! Oops), and kids were saying “WOW” and “How did he do that?!!” out loud. Almost the entire time I was there, they remained rapt, in their seats. Even the grownups were enthralled.

The tricks were good, too, so it wasn’t completely obvious to the adults how everything worked either. Yet at part of the show, he actually taught the kids how to do tricks with their hands — make their thumbs disappear, pull their thumb off and suck on it, make their thumbs longer, that kind of thing. Benji enjoyed it, and I’m seriously thinking of seeing about hiring this guy for Benji’s birthday party this year.

So we finished at Bucky Beaver and said goodbye to Molly on the porch one last time. My heart feels a little bit sad, I must admit — I wish Benji had two more preschool years with her, and I’m sorry her experience, wisdom, and approach to preschool are being lost. But I’m glad she’s getting to retire and be closer to her family, and that Heidi is moving on. Hopefully they do well.

We’re on to our next adventure, too: A totally open summer schedule, followed by a new school in September.