This post is more for me to coalesce my thoughts about this Garmin GPS alternative. I’ll start by saying that I’ve used a Garmin GPS since at least 2008, and 5 of those years I’ve used a Garmin 800 with few of the problems many of my riding buddies have struggled with. I’ve been able to accurately navigate; upload data to various sites (with only the annoying hiccup of Garmin Communicator vanishing, mandating manual uploads); and I’ve only very rarely had data issues. Perhaps a lukewarm review for a $500 device, but hey, at least I can say honestly, It performed as advertised – again, more than many Garmin users I know!

Overall, then, I’m one of Garmin’s few satisfied customers. Even so, I heard in fall of 2015 about a potential Garmin GPS competitor coming out in 2016 that piqued my interest: the Wahoo Elemnt.

I had heard good things about Wahoo’s other products, and in pre-release reviews, the device sounded like it had potential. So I got on the mailing list, and occasionally checked to see if any new, more comprehensive reviews were available. Months went by; the product release was delayed (not surprisingly); and finally reviews of the real product started appearing.

Disappointing reviews. I really wanted this to replace the Garmin, and from what I heard, it has a lot of potential… But still a long way to go. Many bugs and glitches plagued early adopters. I opted to wait – perhaps indefinitely, as my Garmin did work just fine, after all.

Then, on some long rides, I got a low battery warning on my Garmin, even though I had started the day fully charged. Finally, on one long ride, the battery died entirely about 35 miles from home.

That wouldn’t do; aside from losing data (I worked hard for that!), I rely on the map to follow the route, since many 100+ mile days go on roads I’m not familiar with.
That evening, I ordered the Wahoo, mediocre reviews be darned. Then I got excited and compulsively checked the tracking information until it arrived. Dang, still in Memphis!

This story is going long, and I haven’t even gotten to the review. Let’s go there now.

First, a caveat: There are lots of good online reviews describing all the features and workings of the Wahoo. I don’t have a Kickr, which is Wahoo’s trainer that integrates with the Elemnt for some cool features; I don’t have sensors; and I won’t be using all the features. So this is really just what stood out to me as I used it.

Easy. Way easier than a Garmin, because it’s 95% on my phone. So, downside #1: If you don’t have a smartphone, you can’t use this device. Fortunately, I do, and it’s simple to pair with the Elemnt.

The setup took a little changing of mindset, because you can set a certain number of fields to display on the screen in order of priority, and they appear with the first priority one at the top and the lowest at bottom. But then you can change on the fly how many data fields show up by zooming in and out using buttons while on the ride. This is actually pretty neat, because the remaining fields resize to fit the page, letting you focus on only certain stats exclusively or see more different data types, depending on need.

You can fully customize all the pages, and add more if you want them.
You can also very easily configure stock pages, such as map and elevation pages, to show fields you want.
All this is way nicer that the Garmin, because changing settings on the Garmin requires going a zillion sub-menus deep.

This was a big deal for me, because, as mentioned before, that’s the main reason I got a GPS.

First off, the Elemnt automatically syncs with your online Strata/RideWithGPS/etc. account. You log in once, and thereafter it syncs all your routes from those sites. Then you simply select that route and run it – no worrying about TCX versus GPX, or accidentally saving the route into the wrong folder (both common frustrations with Garmin users).

The map is meh, even plain bad. It comes pre-loaded with Open Street maps, but the quality isn’t good and you can’t read road names (I’m not sure they’re even included). It’s hard to make out details on the b&w screen, and just following breadcrumbs would be nearly impossible. Not only that, but there seems to be some bug where part of the map around my house is blanked out in the shape of an X when I look at it while stationary at home, but that seems to go away on the road.

Now, on the one hand, Garmins don’t come with any maps at all, and you have to buy them for extra – a bit harsh when you’ve just shelled out $500 already. But, on the other hand, the maps are decent, and I have always followed breadcrumbs that way, with good success.

Fortunately, the turn-by-turn directions on the Wahoo are excellent. They tell you well in advance-the exact time varies by speed, it seems, but least 700 feet ahead-when a turn is coming, and then as you approach, a little line of LEDs at the top of the screen start running along in the direction of your turn. Very cool. Then, when you complete the turn, it flashes up your next turn and how far away it is.

Also, this navigation doesn’t block your ride data at all: it simply zooms your screen out to accommodate the turn notice, then returns you to normal viewing when the turn is done.

Rerouting needs work. The Wahoo is dumb if you turn around, and keeps telling you to turn right when you need to go left. Then again, I’ve gone way off course, and once I get back on, it seamlessly picks up where I left off. Those are both ongoing problems with Garmin.

I have yet to test how it does on complicated routes that cross over themselves, a common Garmin foible.

But the rides I’ve done following routes, it’s easy to anticipate and take the correct turns, and if lost, I could use the rudimentary map to make my way back to the route.

First off, I have to say I have no sensors of any kind. No heart rate, no power, no cadence or speed sensors. So I don’t know how all that works, whether it’s smooth or not. But based on my experience using the device, I expect those would be easy to install and would work well when installed.

Speaking of installing, you can use the same mounts as a Garmin, only rotated 90 degrees. It’s a bit of a tight squeeze; the Wahoo isn’t actually supposed to work with the Garmin mounts, although they made the mounting system nearly identical and that can’t be coincidence. 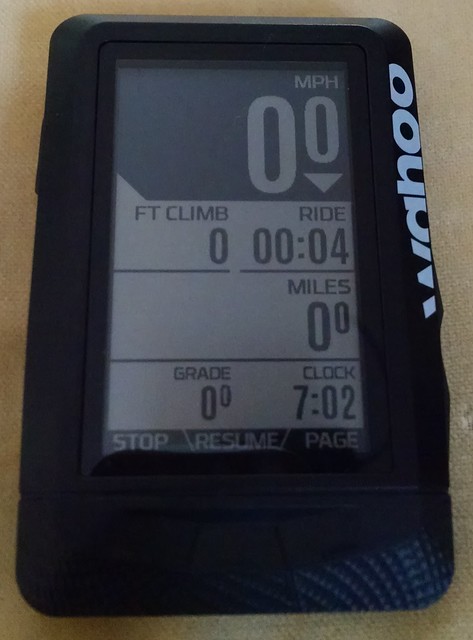 Riding on the road, I found the screen much easier to read than the Garmin (I actually did a side-by-side ride with both devices on my handlebars at the same time). Navigation between screens using the buttons is fine, but I do miss the touch screen of the Garmin…except when the Wahoo is in my pocket. The Garmin always ended up on some random sub-menu 27 clicks deep when carried in my pocket.

Anyway, clicking between screens and reading metrics is easy. When following a route, you get the elevation profile provided on a separate screen, and when using laps, there’s a lap screen that appears. As with all the other screens, data fields are fully customizable, including how many fields and where they appear.

When riding, there are LEDs on the left-hand side that indicate performance. They show one LED lit up to indicate average, and then the LEDs above or below light up more or less depending how far above or below average you currently are. “Average what?” you may ask. Well, you can choose. I chose speed, since I don’t have sensors, but you can also do heart rate or cadence… possibly also power, but I’m not sure. For someone training hard or with a goal of maintaining a certain average, this would be great. Since I ride up a lot of hills, I spend a substantial amount of time in the “below average” region; also, if I’m out for a gentle cruise or a commute, I don’t exactly need to continually be egged on to ride faster. But I could always turn them off, and I haven’t, so there’s that.

Of course, it has auto-pause, although I haven’t figured out if you can set it to auto-pause at a certain speed like you can with a Garmin. It uses the LEDs to flash and indicate you’re paused or resumed, as well as a notification on the screen.

Like the Garmin 1000, you can receive text messages and phone call alerts on the Wahoo. This works just fine. You can dismiss the alert or say “DND” to alerts, and you choose the DND duration.

I’m not sure if Garmin has a tracking feature, but the Wahoo also has a feature where you can share a link with friends/family who want to know where you are on the road, and they use it to look at where you are on a map. I believe that’s a work in progress, as it literally just shows you as a dot, with no back trail or route or any other information.

This may be my favorite part of the Wahoo… although I’m not sure. I really like it a lot for various other features. When I get home, it connects to my WiFi and automatically uploads my rides to the selected sites I linked up with initially. No more finding time to sit down at my computer, digging out the cable, and then hunting down the correct ride data to upload. Nope. Just appears, like magic, on my RideWithGPS and Strava sites. I’ve been going back and renaming the rides, but that’s all the manual work I have to do. Pretty phenomenal.

I have only done one very long ride with the Wahoo so far, and a number of shorter rides, so I haven’t pushed the battery life to the max. It’s advertised as 17 hours (I turned the backlight off entirely), which I certainly hope is true. We’ll see.

That said, I have cautiously come to the conclusion that I like the Wahoo much better than my old Garmin 800. Once I have confirmed the battery life works for all-day rides, I’m going to sell or give away my old Garmin and never look back.