Benji has really taken a shine to these “Captain Awesome” books lately. They’re short chapter books for approximately second-grade readers, so while Benji usually understands all the words, he doesn’t always get the nuances. But he gets the gist, which is that this second grade boy has a secret superhero identity as Captain Awesome, and the Captain fights “evil” when he sees it (which is frequently). In one of the Captain Awesome books, the boy goes to superhero camp, and since we read that book, Benji has been wanting to do his own superhero camp.

Which proved not only possible, but quite fun, with some planning. I brainstormed ideas with Mom, and we invited our friends Colin and Wendy McCurley (oh, and their chauffeur and chef Jane) over to join us. In the end, I put together a scavenger hunt, with the kids having to do different activities at each station in order to achieve the final goal. Oh, and did I mention the McCurleys came in costume? It was perfect! Benji was thrilled, and of course donned and wore his superhero cape the entire time. 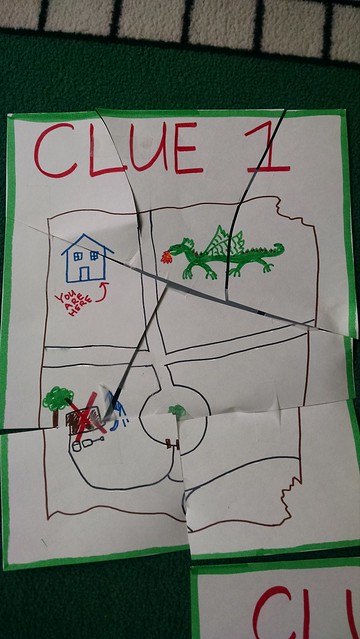 This clue, which is a map to the park where the rest of the activities occurred, I cut into puzzle pieces. Their first activity was to put the pieces back together and follow the map to the location marked with an X. This was fun because it also involved a lot of tape, which is popular with the McCurleys right now.

I had also drawn arrows on the sidewalk for the kids to follow, and it was pretty delightful watching them go dashing down the sidewalk shouting, “There’s a clue! There’s another clue!” I had to dash ahead to make sure everything else was ready to go. Fortunately, Mom camped out at the park and had kept everything ready. 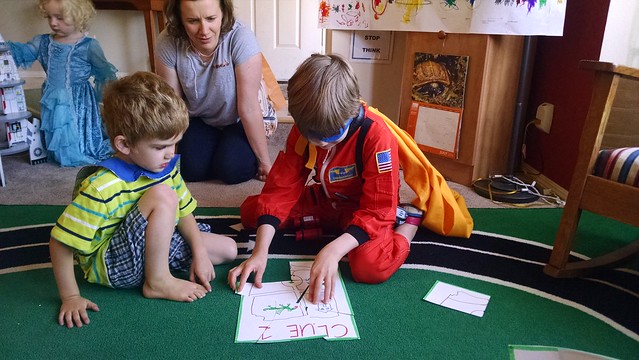 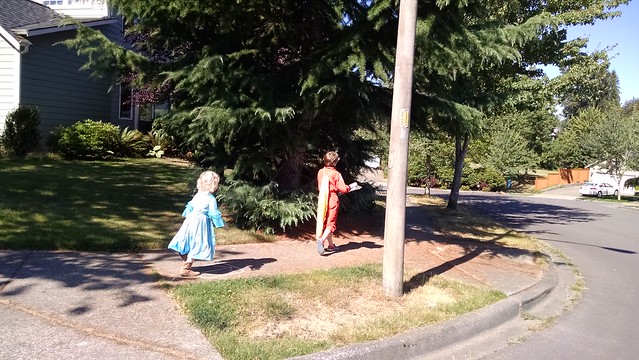 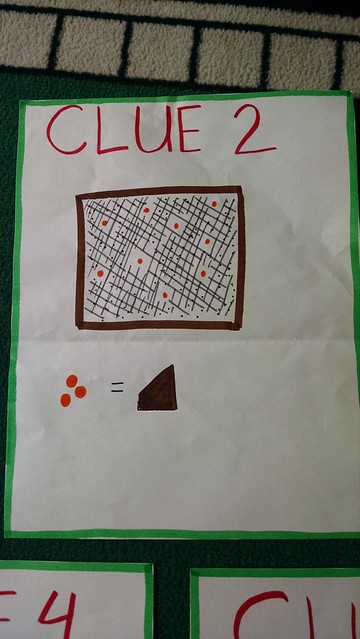 For the second activity, I had seeded the sandbox with 45 shiny pennies, just sort of tossing them around so they really glittered in the sun — but were partly buried. I gave Wendy the second clue, which they figured out meant that they needed to collect the pennies. Fortunately, Colin had worn his “accessory pants” and was prepared with many pockets. 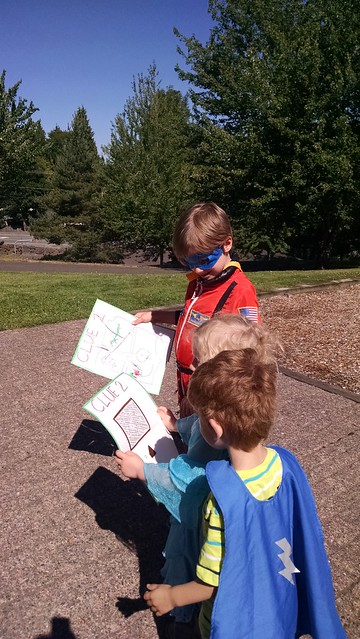 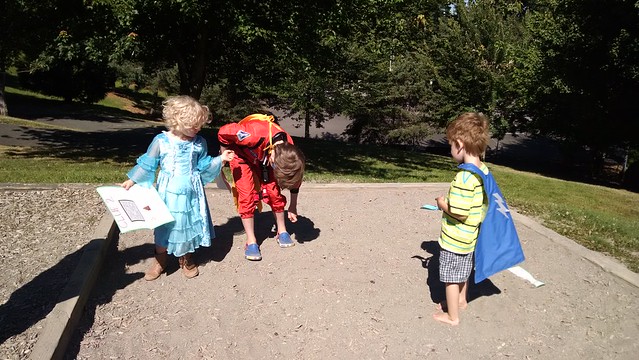 Benji got to dig up the third clue, which was buried with the pennies, and he immediately recognized the location of the next activity. 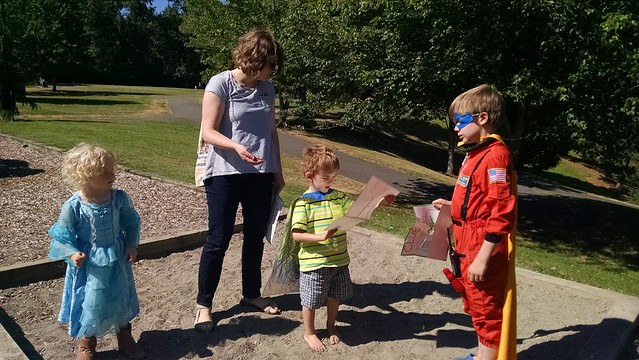 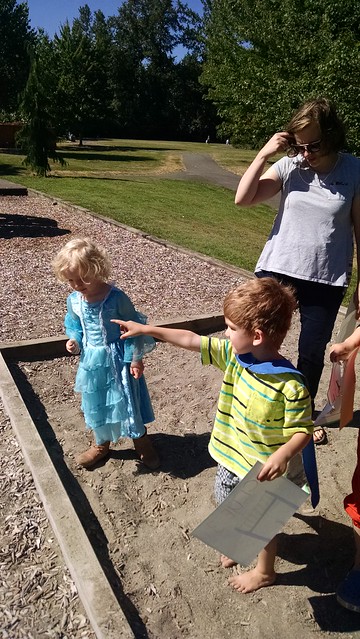 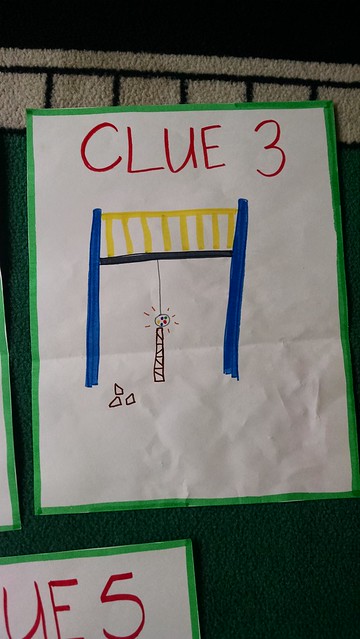 This clue had the kids build a tower to reach a bag dangling from the play structure, and they had to build a tower out of blocks to touch the bag to open it up. Each block cost 3 pennies. In the bag was the next clue and a bunch of marbles. I had built a tower and calibrated the bag height accordingly, but interestingly, Colin evolved a different tower design that required more blocks than I anticipated. Fortunately, I’d provided enough pennies for 15 blocks, which proved ample.

Building the tower, it was good to have Colin there because it took him quite a while of interating the design and the buying blocks. It did take a long time for Colin to fish pennies out of pocket, however, and Benji did have to go back and mine a few more pennies at the end. Wendy, meanwhile, simply went up to where the bag was tied and suggested letting it down from there. I’m pretty sure she’ll be ruler of the world one day. 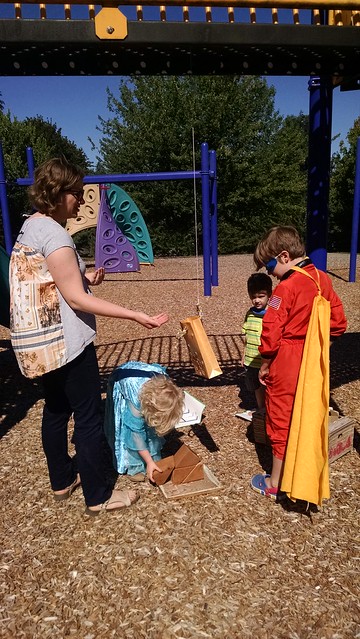 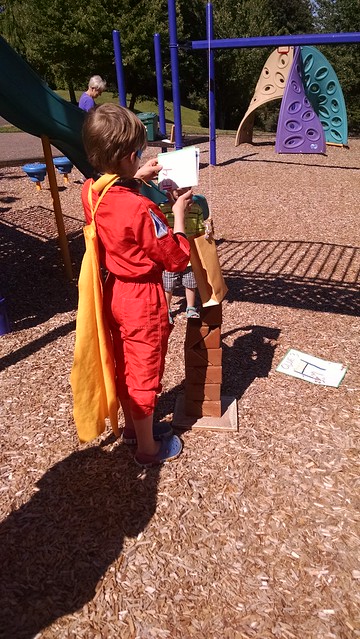 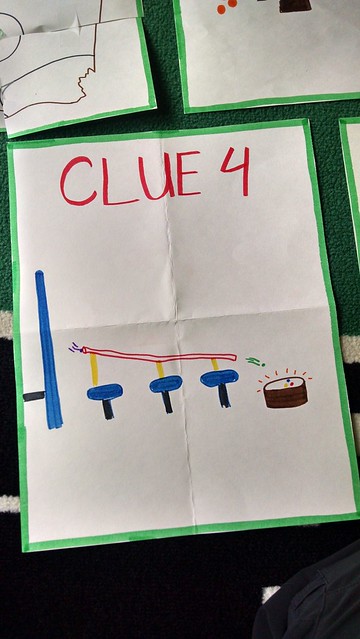 For this activity, the kids had to build a marble maze across the blue balance mushrooms and get the marble into a bowl containing the fifth clue. Mom provided the big bin of marble maze pieces and some blue tape for stabilization. We ended up shortening the run, but it still worked out quite well. 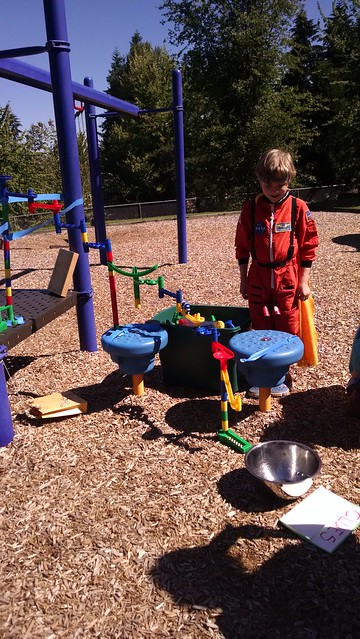 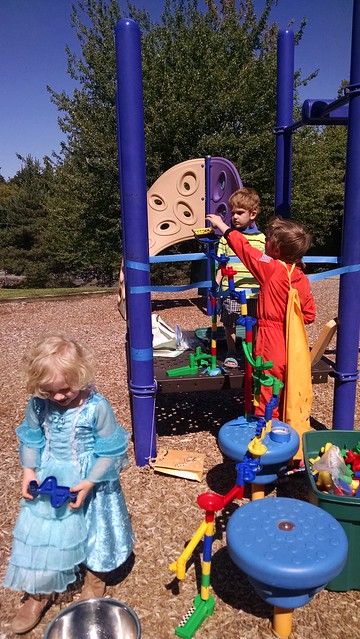 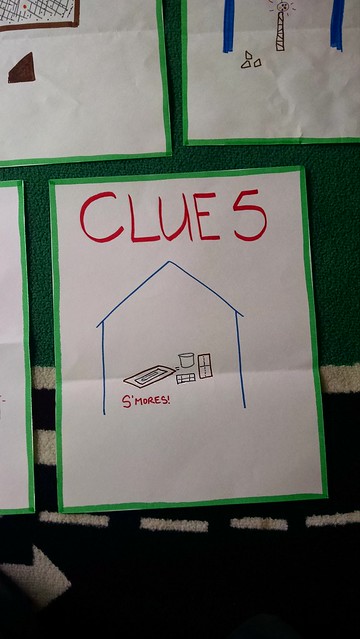 At last, we get to eat something! We all went back home for s’mores (made in our toaster oven! It actually works amazingly well) while Mom kindly cleaned up and brought all the stuff back home. These were more fun to make than eat, evidently. Benji managed to consume many “raw” marshmallows but declined to make a s’more; Wendy made hers and admired it but didn’t eat it; Colin actually ate one and all his chocolate vanished; and Jane and I each ate one.

And that was superhero camp! 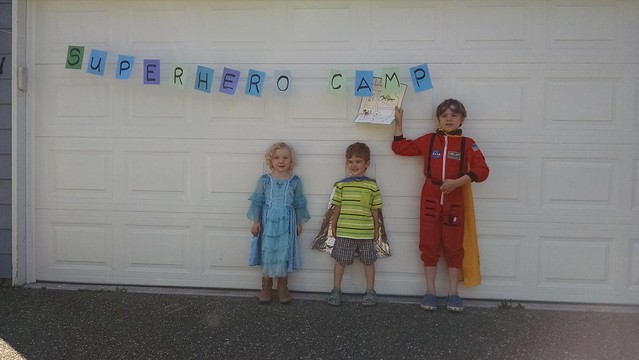 The kids all got prizes at the end, which included beautiful glittery stickers ($1 each at Michael’s), a tiny book of post-it notes (free swag from Mom’s work), and a miscellaneous prize supplied by Jane (leftover from a church event) — Benji selected magnetic ABCs.

Benji is already asking when he gets to do superhero camp again. I definitely deem it a success.