Yesterday, Dad and I rode Mt. St. Helens. I last did this back in 2011, also, and I remembered beautiful views and difficult climbing, with stiff headwinds on the way back. The roads were nicely paved, though. Yesterday was similar but also very, very different.

So I’ve been thinking about how to approach talking about this ride, because it wasn’t quite the ride I planned on doing. As you know, I normally don’t even mention my rides unless they’re really exceptional. Our St. Helens ride certainly was noteworthy. Yesterday I was going to talk about what went wrong, but after sleeping on it, I’m going to talk about what went well first. 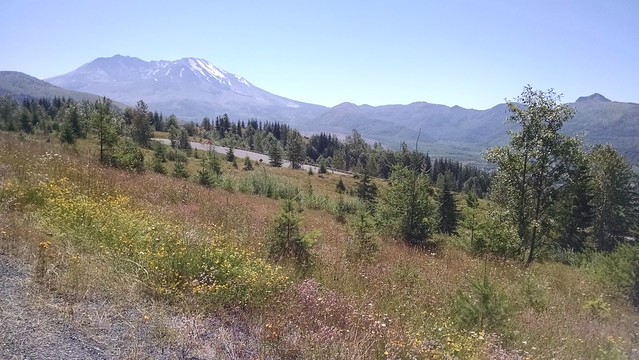 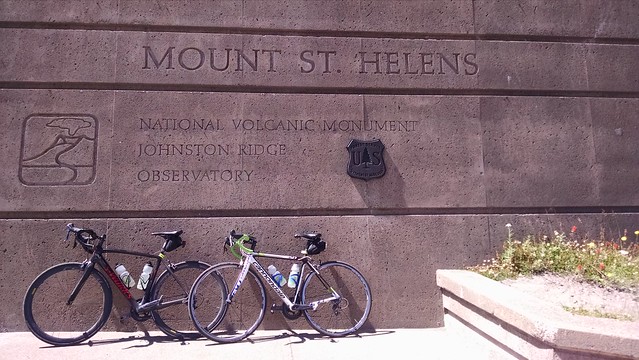 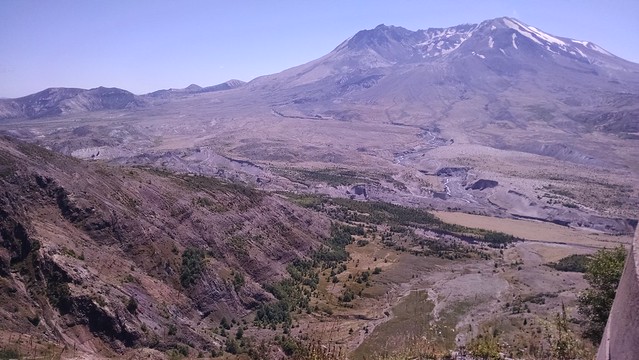 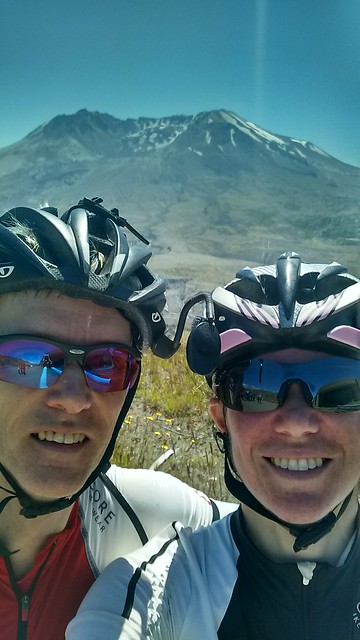 So overall, lots of good parts of this ride.

Nary 5 miles into the ride, we saw a sign that said “Loose Gravel – Next 35 miles.” This translates to “all the way to Johnson Observatory,” our destination. But we elected to just see what that meant, and for the next 10 or 15 miles, it really didn’t mean anything. Just a little extra bit of gravel in the shoulder, but nothing noteworthy.

That remained true right up until we came upon the long line of traffic stopped by a flagger. Ahead of the flagger, we could see some really bad news: A long road of chip-seal being freshly laid down as we watched. The flagger told us that all the cars had to wait for a pilot vehicle to come drive them through the work zone, and that we had to wait not only for all the cars to go, but then wait for our own pilot vehicle to come escort us.

We had ridden barely 20 miles at that point, and having driven 2.5 hours down there, didn’t want to turn around with not even two hours of ride time. So we waited, and got our own pilot vehicle. They wanted to make sure we didn’t exceed 25 mph up the mountain — ha! Anyway, that was fine. We were able to ride in the lane not yet chip-sealed, and then in the shoulder where the chip-seal didn’t extend.

We did deliberate some about whether to continue, if it was all like that; but the pilot car driver told us it was only a couple more miles, and then the rest was well-packed but un-sealed gravel chip-seal. Not my favorite riding surface, by any stretch, but not alarming like the loose, freshly-laid gravel. I kind of pushed for us to go on — after that whole drive, I wanted to make it worth it.

The ride up went tolerably well. The chip-seal wasn’t fully sealed — it still was gravel, without the final layer of tar/oil/whatever black gunk to hold it all together completely — but it was very firmly packed down and not troublesome to ride on. The shoulder, with its random loose bits of gravel, was actually worse. On the way up, we had no real trouble.

The climbing wasn’t a problem, the road was extremely bumpy and a little alarming at spots, but tolerable, and the weather steadily improved. The clouds cleared and we got some lovely mountain views. Dad and I felt strong and while we did feel like it was challenging at the top, it wasn’t the kind of grueling slog I felt at the top of Haleakala (presumably because I’d done barely 1/2 the climbing yesterday — 5,000 feet compared to 10,000).

On the way down, the un-sealed packed chip-seal was more problematic. Normally we’d have been flying down those descents, but with the gravel being only packed and not sealed, I (at least) took it much more cautiously. It was a bit of a bummer to only go 20 or 25, but I didn’t trust my ability to stop on that gravel. Every time cars went by — which was pretty often — another layer of dust and gravel went flying into me. I was filthy, I got tons of road dust in my eyes, and my bike paint job will probably never be the same.

There was some extra climbing on the way back, which made the ride feel like it was uphill both ways; and we did have headwinds, as I recalled. But really those were overshadowed by the unfinished chip-seal of the road. When we got about halfway back, we planned to stop at the Forest Learning Center to refill our water. But right before we got there, we hit the construction zone where the cars all lined up waiting for a pilot car to go the other way. We had to wait for a long, long time for that pilot car, and then we had to wait for the very long line of cars to go by, and then we were finally allowed to ride 1/2 a mile from the flagger to the Forest Learning Center.

Things got worse from there, at least for me.

So what you should know is that I’m terrified of loose gravel. I don’t have the best bike handling skills, despite years of practice, including multiple LCI trainings and bike handling clinics on my bike racing team. I’m just really concerned about slipping and falling.

I rode in the snow in Massachusetts, but was an effort to overcome my fear every time, and I did fall many times. But falling in snow isn’t that bad; you’re bundled up, at least, and snow is fluffy and soft (although, to be fair, ice isn’t).

What’s not fluffy and soft? A road freshly spread with tar and then unpacked chunks of gravel.

Suffice it to say that the interminable section of fresh, unpacked gravel literally brought me to tears. At first it was OK, but as it went on… and on… and on… I slowly descended into terror and misery so deep I just started weeping. I’m pretty sure my face was horrifying. I didn’t stop riding; but I rode and wept and doggedly fought to stay upright and moving forward as the guys I was with disappeared into the distance, and even Dad pulled away. I was just so terrified of crashing, and I could so keenly imagine the feeling of falling and having that gravel embedded in my skin, I was utterly overwhelmed. Overwhelmed with fear. I was utterly miserable, in the “depths of despair,” as Anne of Green Gables would say.

Terror, fear, and misery. Not generally associated with a positive bike ride experience. I imagine lots of people feel those when riding, but I don’t, usually, because I stick with what I know: Road riding. Call me a wimp, but I have always stuck with what I can do decently well. This ride forced me — literally — to ride through conditions I would always avoid. I would ride 50 miles out of my way to avoid that 5 miles of loose gravel, but there was no choice, no other road. If I wanted to finish, I had to do it.

So I did, terror, fear, misery and all. I finished the ride feeling unsuccessful, disappointed with my performance, discouraged, and wishing I’d done something else.

I’ve been thinking about this, though. And in the sermon today, I was listening and thinking about being handed a “hard word” — something you need to hear, but don’t want to hear. The sermon was in the context of a job, and I do have that in my work sometimes, but yesterday was a hard word for me about my character.

I have let fear rule my choices, not only in biking but in other areas of my life. The ride yesterday, being forced to confront that fear and, frankly, feel like the fear won… made me realize I don’t want to let fear rule my life. I was too afraid to look up from the road to see the spectacular views. I let my friends get away. I was alone, too afraid to try to stay with them. I was willing to give up everything that made the ride wonderful and worthwhile, just to try to avoid crashing.

Yet, crashing, is that so bad? I wasn’t going real fast, I might have gotten some nasty gravelly road rash, but unlikely to break anything. Ultimately, it probably wouldn’t have been that bad. A little painful, yes, but probably not more painful than being overwhelmed with fear and misery.

This ride and the sermon today made me realize that I’ve been willing to sacrifice the opportunities in favor of maintaining the safety of the status quo, because I’m afraid change might bring something worse. That’s always possible, but without change I can’t get to anything better, either.

I’m tired of letting fear rule my life. I want God and His priorities to rule my life first and foremost, whatever that looks like, however frightening.

2 thoughts on “Building Character, One Mile at a Time”