Today it was 25° in the morning, sunny and clear. Dad had posted this lovely route, and I initially planned on joining him. The ride started at 11:00 am, late enough to let things warm up, if they were going to. Before then, Benji and I went to the hardware store and bought more chemical toe warmers, an essential component for making these cold-weather rides tolerable, and it brought home to me how downright freezing it was outside. Literally.

When it came right down to it, I thought about my week — four days of wet or subfreezing commuting — and I just couldn’t do another day, even a dry and generally lovely one. It was the thought of putting on all those clothes again; coughing from the remains of my cold objecting to the freezing air; fingers and toes slowly or quickly freezing; –after some agonizing, I opted to ride my trainer. Plus, it gave me time to spend with Benji and my mom, which I don’t get to do as much these days.

I didn’t want to miss Dad’s ride, though, so I decided to give my best shot to approximating the climbs on Dad’s ride while on my trainer. Here’s my methodology: 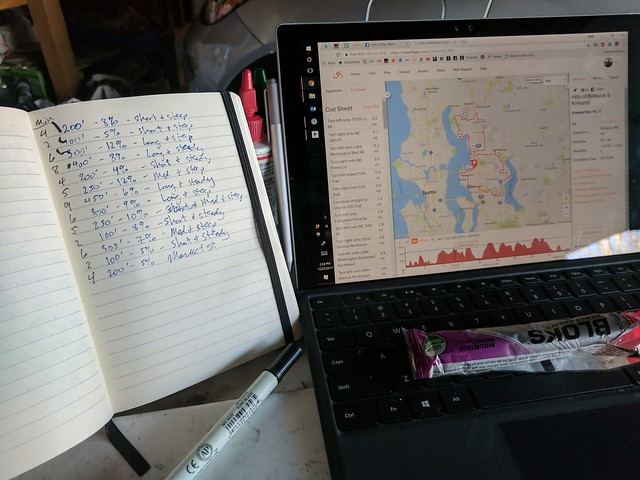 After each hill I marked it off, because by the time I’d done a half-dozen, I couldn’t remember where I was. I also kept referring to the elevation profile to estimate how steep it would be, and tried to adjust gearing a bit based on that.

Here’s the real route elevation profile compared with my heart rate on the trainer ride, which, since I don’t have a power meter, is my best measure of effort.

Overall, I rode an hour and 45 minutes, a little longer than usual on the trainer, and felt like it was an okay workout. The big weakness was, of course, me. Hills are only as hard as you want them to be, and while I did try to push myself, my heart rate never got anywhere near what it would have been on a group ride.

Which leads me back to the idea of a smart trainer. Wahoo makes one that’s compatible with my Wahoo Elemnt bike computer. In addition to working with programs like Zwift and Sufferfest, which many of my buddies use, the Wahoo Kickr is supposed to be able to approximate any ride or route, changing resistance based on the real ride data. Basically, it does perfectly what I did really awkwardly today.

The question is: Is that worth $1,200? Or, put another way, how many more rides like the one I did today would I have to do to amortize the $1,200 smart trainer price tag? If I keep commuting, how many days will I ride a trainer anyway? Are there other options, like using ANT+ to pair my Surface with my existing bike sensors in combination with some subscription service?

I don’t know. It all comes back to the fundamental question I’ve been struggling with the last couple months: What do I want to get out of biking?

If it’s intense training and increased speed/fitness, then a smart trainer or subscription service might make sense. I’d commute a lot less and ride in the garage a lot more (although where I’d find the time, I can’t imagine). I’d definitely get stronger and faster, but I’d also have to take the bus a lot more, and probably wake up even more painfully early.

If, on the other hand, I’m riding because commuting is a great way to get home and it helps keep me generally healthy, then I don’t need a smart trainer. I may get slower — it’s almost a certainty, because commuting sucks as training — but that won’t matter, because I’m just getting from Point A to Point B in an enjoyable way.

Last year I tried to ride a line between the two, interspersing training in with commuting, but only had mixed success. My legs felt tired all the time, but I remained slower than my bellwether riding buddies. I completed my annual hill rides, but overall went slower than previous years.

Is there some middle road (no pun intended) that I’m missing?