Happy Easter! Christ is risen; He is risen indeed!

Yesterday was a beautiful day. I was thankful to spend the first half of the day with a group of my biking friends doing a super hard ride. I don’t know why it felt so much harder than previous rides, but I felt like I got a great workout… at least, I trust that’s what that leg-burning feeling means.

I also accidentally gave myself a chainring tattoo, which didn’t wash off in the shower. I figured would look real great with my skirt at church on Easter. 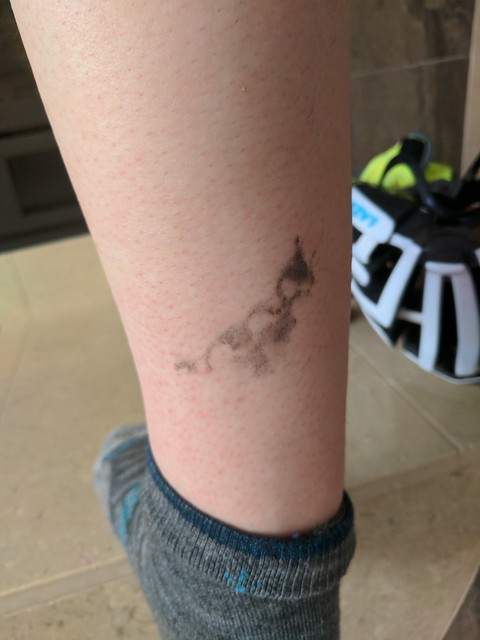 Luckily I had some dark nylons that hid it pretty well, I think. Continue Reading >>

Yesterday we got together with my friend Ellen. One of the (many) things I like about Ellen is that she always pushes our boundaries with her suggestions for what to do. She’s the one who took me cross-country skiing before Benji was born, and left me practically unable to walk for like a week (the blog post title: “A Litany of Aches.” Ah, good times). She invites me and Benji to parks in the city of Seattle that we otherwise never would go to. She encourages me to eat odd things and try tea I wouldn’t normally have. It’s good to have this kind of friend. Continue Reading >>

This morning we had so much fun that Benji couldn’t calm down enough to fall asleep at nap time. Ingredients for this exceptionally fun morning:

Get permission to closely examine the trucks while the firefighters are training. Conduct said examination with Miss Ellen.

– Hike to the lake like a big boy, walking the entire way there and most of the way back.

While at the lake, learn what I mean when I say, “Watch out or your feet will get wet.” But, simultaneously, do an excellent job obeying when I ask not to go deeper. Continue Reading >>

We’ve lived in our house for over 3 years. A hose hanger has languished on our back porch for a year. Now, finally, I have a home for our back yard house. Seems small, but it’s sure nice to have it off the porch!

Back in April, we paid money to a upholstery place to make new cushions for our old, sagging couch (which, I will say, came to us free). At the of July, the guys came and took our couch. And finally, last week, it came home. Hooray! Amazing how comfy and improved it is. Continue Reading >>

Day’s Verse:
It’s best to stay in touch with both sides of an issue. A person who fears God deals responsibly with all of reality, not just a piece of it.
Ecclesiastes 7:18

Whew, it’s been a heck of a few days! Benji has been all over the board with sleeping — not literally, he still doesn’t move on his own, but figuratively — and on top of that we actually did stuff this weekend:

Saturday
Really long, difficult night Friday night/Saturday morning. We both ended up sleeping until later than usual, and still moved through most of the day as zombies. This later-than-usual sleeping meant that when we woke up, we actually had to get rolling, because we had a play to get to at 2:00 pm. We packaged Benji, who finally fell asleep a mere hour earlier, into his carseat, gathered up the requisite huge pile of stuff necessary for traveling with babies, and somehow got out the door mostly on time. Traffic was horrendous, but we made it to my friend Ellen’s house close to on time. She and her family looked after Benji for us for the afternoon while Ian and I went to our play. We saw Gaudy Night, at Taproot Theater, and really enjoyed it despite having nearly the worst seats in the house. Continue Reading >>

Day’s Verse:
Anyone who meets a testing challenge head-on and manages to stick it out is mighty fortunate. For such persons loyally in love with God, the reward is life and more life.
James 1:12

A few days ago — Thursday evening, perhaps — I thought, “Gee, it’s been a while since I updated my blag. I’ll do something about that tomorrow afternoon.”

The following afternoon, however, found me horizontal on the couch, unable to painlessly move anything below my neck. Sitting up was a trial, as it involves legs and back. Typing — holding my arms out — forget about it. Much better to just lay on the couch and occasionally groan. In fact, it’s only today that I’ve had the oomph to stay upright long enough to blag. No, I didn’t get in a bike crash; and, in fact, I’ve had crashes that left me feeling less battered than I did on Friday evening. Continue Reading >>

Day’s Verse:
I know that there is nothing better for them than to rejoice and to do good in one’s lifetime; moreover, that every man who eats and drinks sees good in all his labor — it is the gift of God.
Ecclesiastes 3:12-13

How do you teach PE teachers — or anybody — traffic principles without resorting to excruciating PowerPoint slides full of confusing pictures? Since I don’t teach it with too many words, here’s the visual explanation. Remember the practice intersection I made?