I don’t think of myself as a leader or an innovator. I don’t come up with big ideas to drive the future of a field. People don’t look to me for guidance for, well, anything (especially my son, who recently learned the phrase, “You’re not the boss of me.” Wanna bet?!)

But one thing I’ve done that I’m actually proud of, that came out of my own head, is the joke board at work.

The premise of the joke board is simple: Every morning when I get in to the office, I spend a few minutes scouring the Interwebs for the best, freshest, punniest dad-style joke and I write it up on a small whiteboard I’ve appropriated for the task. (Lately I’ve also posted it to a dedicated room on the company’s internal chat service.) If people have additions or further puns, they write or post them. Then we do it all again the next day. Continue Reading >>

One of the things I’ve been doing at work, besides working, is running the Joke Board. This started out as a totally random thing: We had a small white board, and it tended to be propped up in a high-traffic area in our section. We would sometimes use it to share food with a note like “Please enjoy these homemade cookies!” Like this: 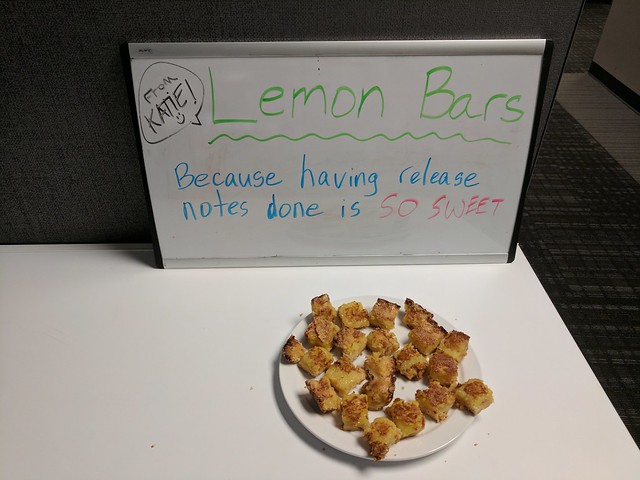 One day I had a joke that I thought was funny, so I wrote it on the white board to share with people walking by. Several people, walking by, read it and chuckled, or at least shook their heads as they walked away. I started writing jokes up on the board every few days, maybe two or three jokes a week. 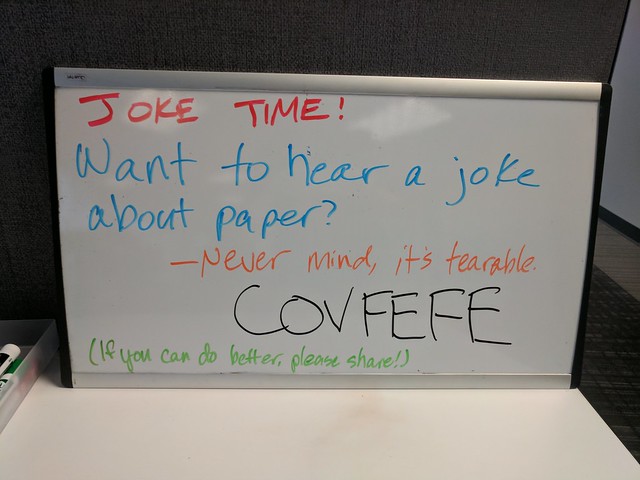 I’ve been doing this for several months, and people like it. I know because occasionally with a really good joke, I’d see people taking pictures with their phones, presumably to share with friends. Sometimes people would write up an alternative answer if they came up with a good one, or leave other comments (one time someone gave a +1 to an answer, an amusingly analog version of a digital kudos). A few times other people have even put up their own jokes:

What do you call a bear that’s gotten stuck in the rain? A drizzly bear. OR, alternative answer offered: A drown bear.
Why are there no knock knock jokes about America? Because freedom rings.

Several people have told me that they bring the jokes home and share them with family members. I know that I inflict these jokes on my biking buddies, eliciting many groans of dismay (but I know it’s happy dismay). At least two people have told me they specifically walk by every day to check the joke board for the next joke. And of course at work I see many people pause, read the joke, and walk away shaking their heads–the ultimate sign of a successful joke.

All my jokes are either puns or dad jokes. There’s not enough room to write an elaborate joke; they really have to be one-liners or a question and answer. Thanks to the Internet, I have ample jokes to keep the board going, but I now have more pressure than ever to find good jokes!

So we were humming along happily for a while, and the joke board was getting its own following.

Then, oh no! A new guy got hired and chose to sit in the empty spot occupied by the Joke Board. But when God closes a door, He opens a window (or so I’ve heard), so I took the opportunity to have the Joke Board officially hung up on the wall near our area. 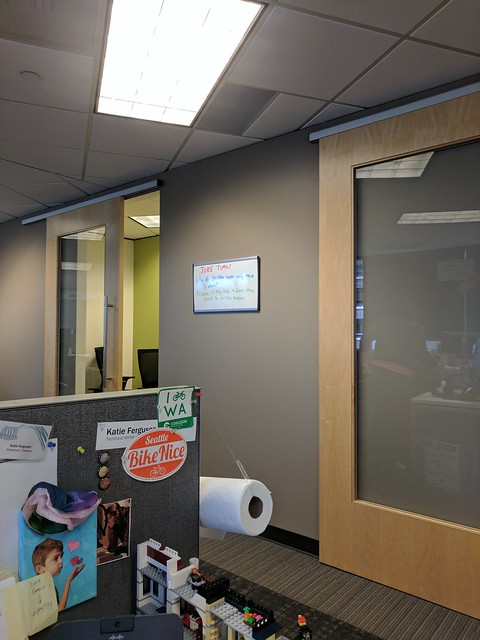 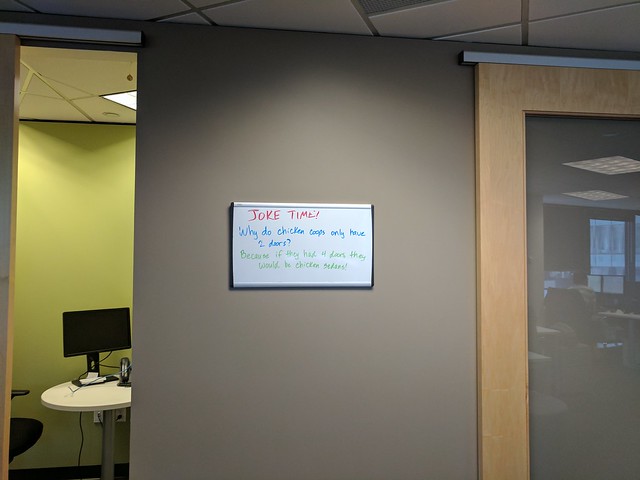 By the way, getting the board hung up was no joke. I had to contact our receptionist and I asked him to put in a work order with the building management company. They sent a handyman with his little cart of hooks and screws and a level, and this guy hung it up. Alas, he hung it slightly off-center from where we asked, but oh well, now it’s up and it’s official!

I was out sick for a couple days last week, and when I got back there was a new joke up. One of my team members had written a new one, and they told me that they’d even had another joke up in the interim, which elicited several participatory alternative punchlines.

Here’s today’s joke board, which I got so many laughs from–first the pun itself, and then at least half a dozen times watching other people read and react to the pun. It’s truly priceless. 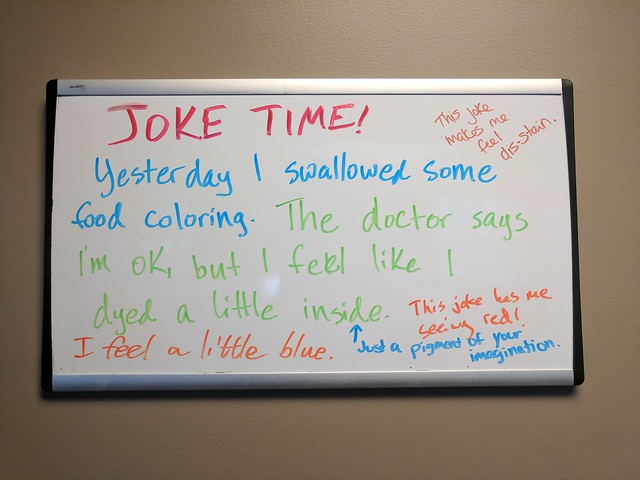 I’m about to do my six-month employee assessment. One of the questions is: “What are some of your accomplishments from the last 6 months?” I’m absolutely putting the joke board in that list.