It’s the first weekend after my first week! By Friday, I sure did feel more tired than I have in a long time. Between not sleeping much from anxiety and actually doing stuff out of the house all day (even if just mostly sitting around), I sure was ready for the weekend!

After some discussion with Ian, I did go for a bike ride as usual.

It went better than the previous week, but my leg around the back of my knee is still hurting pretty severely by the end of rides. It’s a bummer, but I trust it will resolve itself eventually. But it was a beautiful day for a bike ride, about 50 degrees and not raining, so well worth going out. Ian and Benji were OK with sticking with our usual Saturday routine, even though I’d spent much less time at home than usual.

When I got home from my bike ride and Benji woke up from his nap, Benji, Ian, and I went to the park near our house. We played a game we called “Star On/Star Off Machine.” Benji would pay me some wood chips, and then go down one slide. As he went by, I would tap his tummy and say “Boop! Now you have a star on thar!” Then he would pay Ian some wood chips and go down the other slide to have his star removed. We kept playing this after Ian went to go do dinner, and it evolved to seeking treasure to pay for the star on/off. 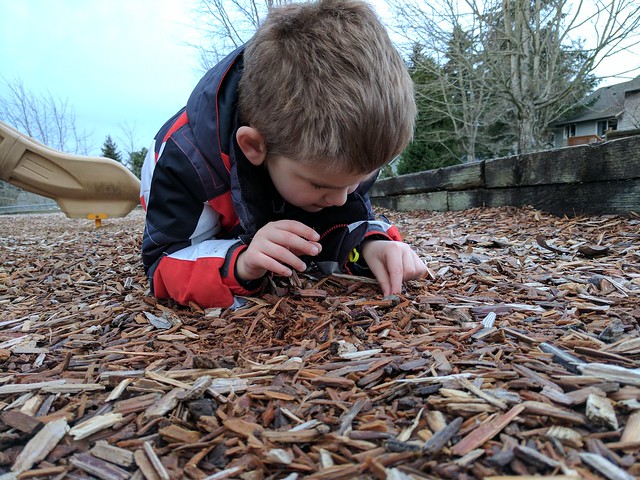 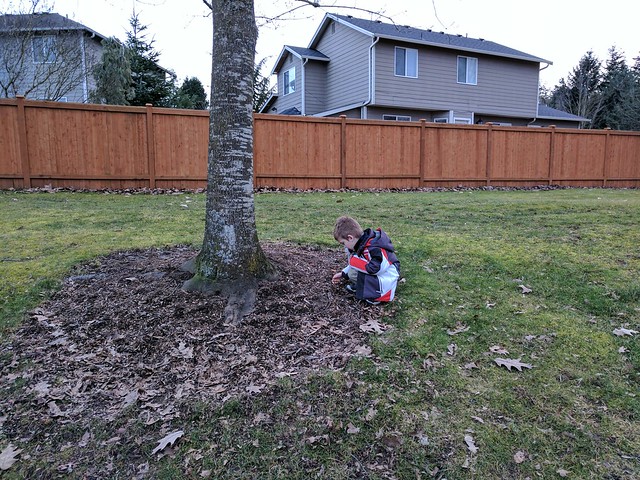 Treasure included handfuls of sand, grass, and moss; the caps from acorns; interesting shapes of wood chips; pebbles; pine cones; and sticks. I deposited them in the “bank” we set up, but Benji kept bemoaning that he never had any deposits in HIS bank. –because he spent all his treasure on stars!

After dinner, we had a very serious game in which Ian managed to balance four pillows on his head at once, which really tickled Benji’s funny bone. It was pretty ridiculous to turn around and see this giant pile of pillows on his head. But you don’t need to take my word for it… 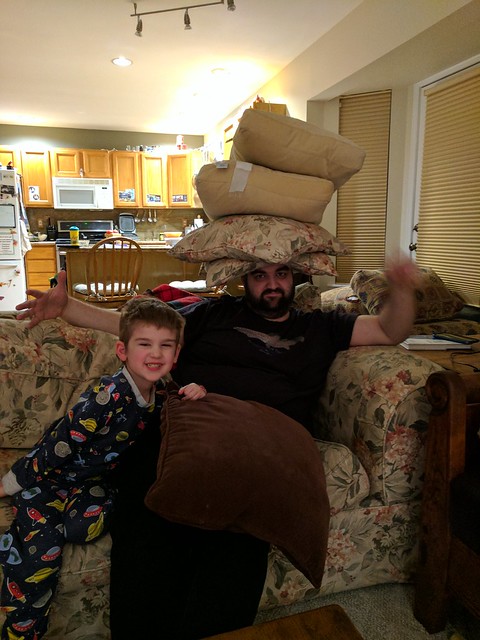 At church, I helped in the kid room. We’ve had 16 to 20 preschoolers in the room the last few weeks, way too many for just two volunteers to help out with. The coordinator asked me to help out even though I’d already done my stint this month and I said sure. We did all the usual stuff, but then the coordinator, Ken, had a new game for while we waited for church to finish: Silent Red Light/Green Light. It was the same as regular, only they kids couldn’t make any noise during the game or they had to go back to the start. 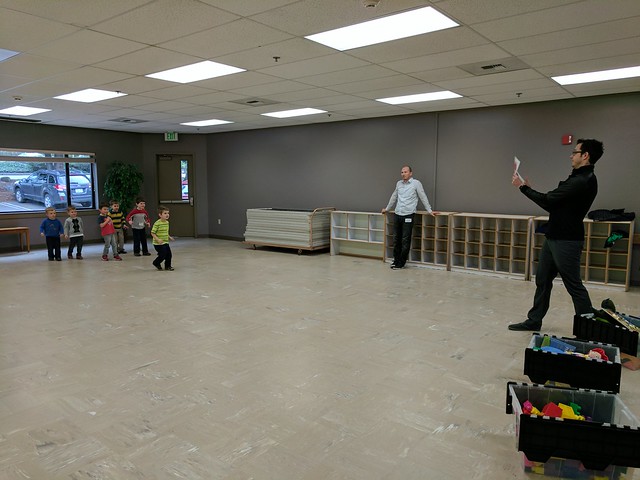 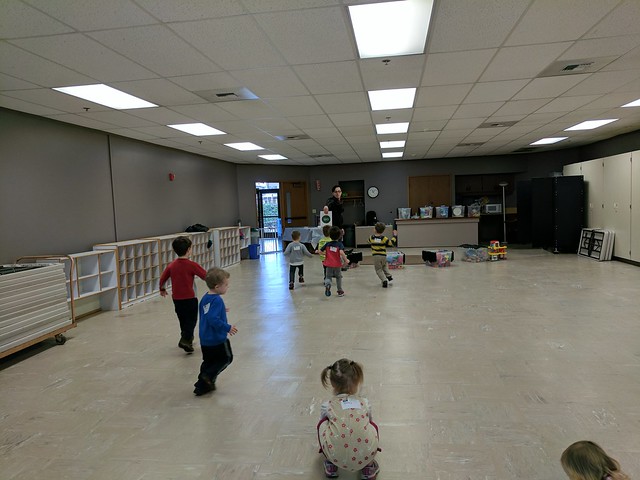 It was hilarious watching them! The kids tried so hard to stay quiet, but they just couldn’t. They kept being repeatedly sent back to the start, both for breaking the silence rule and for going when the Stop sign showed. Benji finally won once when he realized he could run, not just walk at the same pace as all the other kids. That started an arms race of running, which led Ken to finish the game with crawling. 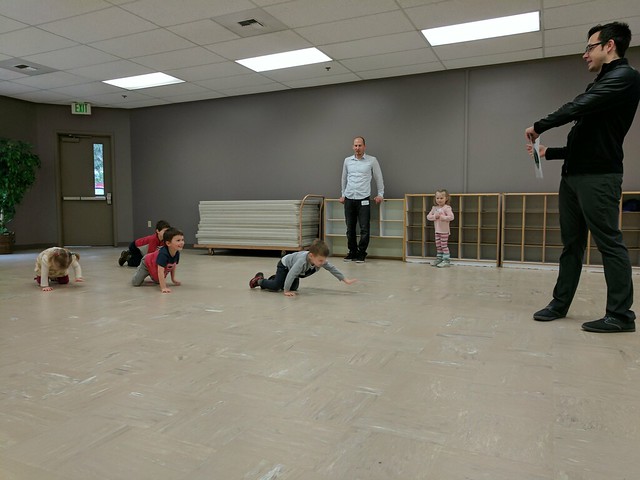 A couple of the littler kids didn’t quite get it; they ran when the Stop sign showed, but when questioned, explained that Stop means “Go” and they really just wanted to get a high-five. Oops. Still getting the hang of this.

When church finished, we played at the nearby park for a while, as it was another sunny-ish and pleasant day (although getting windy, which makes me think of weather changing). 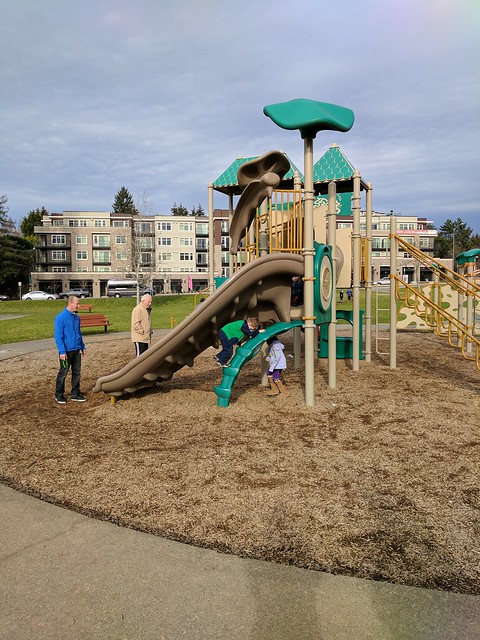 Then I got my weekend goal done (scanning tax documents, very exciting) during nap time; when Benji gets up, it’ll be time to head over to my parents’ house where Benji will spend the night while Ian and I go bowling with our church group.

Overall, it’s been a great weekend — we’ve gotten done what needs to happen, and I think we’ve all gotten to play and relax, too. I don’t know if it’s going to be sustainable, staying so busy all weekend, but as with everything else, we’ll see how everything shakes out as time goes by.