It’s Saturday. That has, for many years, meant that I go for a big bike ride. But with the return of my virus and taking Thursday and Friday off this week again, I decided to skip the big ride. I tried going out by myself, but after a couple hours just felt tired and gross and it was clearly time to go home to rest.

Which I did, for several hours.

After which, this happened. 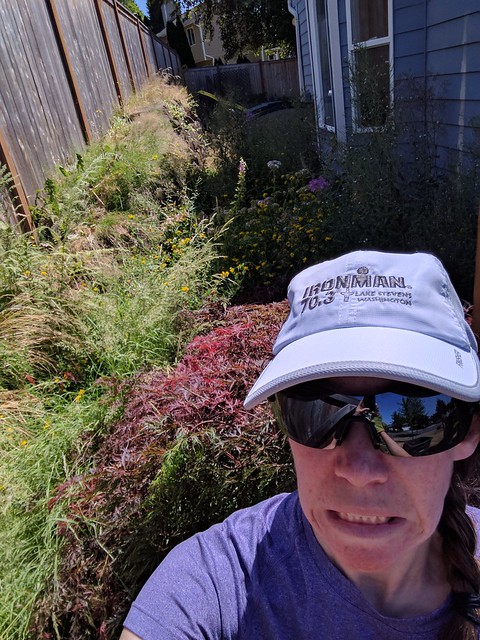 Benji rightly dubbed it “The Jungle,” an area on the side of the house (the opposite side from the Meadow of Goodness, in case you’re wondering) harboring weeds taller than myself, plus a density of weed undergrowth that cannot be overstated. I shudder to think of all the creatures living in there, too.

Originally I cleared this area and planted it with some wildflower seeds, just to see what would come up. What I got was a 10:1 weed:wildflower ratio — no fault of the seed packet, I’m sure; I simply didn’t go out and combat the weeds at all.

Now, after a couple years, the Jungle harbors this pernicious vine that keeps trying to take over our yard; I don’t know what it is [EDIT TO ADD: It is birdsfoot trefoil, Lotus corniculatus, apparently a good and useful fodder for various animals in pastures, but NOT IN MY YARD], but it has these yellow flowers that grow in clumps, and clumps of five leaves and then a big gap. It alone comprises probably 50% of the biomass in The Jungle. I’ve been slowly trying to get rid of it every time I find it in my yard, but it’s everywhere and it grows through the ground and then pops up, making it incredibly difficult to remove. I can’t truly eliminate it, at least not at this time; there’s too much, and I can’t get down to pull every root when it’s literally filling the side yard to a height of 4 feet everywhere as it grows on top of all the other plants and itself.

No, this was a quick and dirty assault to yank out anything anywhere near or involved with the yellow vine, along with the vine itself. The yard waste bin started out empty, so I decided to just go until it was full. 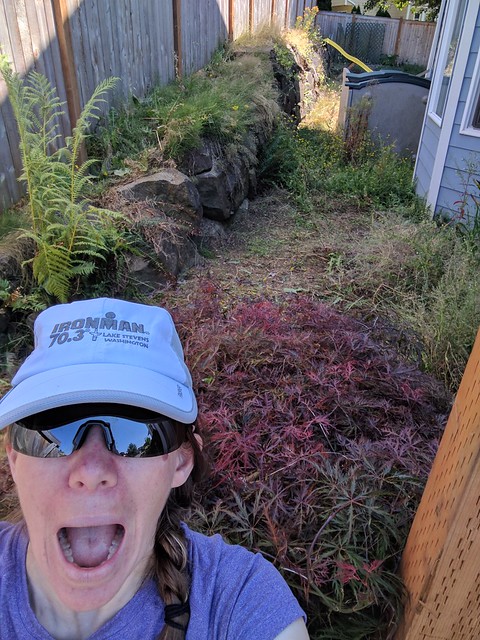 This took about an hour and a half, during which time I probably inhaled a week’s worth of pollen (sorry, immune system!) and got covered with a full body velcroing of burrs.

I also discovered a day lily, which has these lovely deep red and orange flowers, and several very nice ferns of a couple different varieties. I’m guessing those will all be happier not to be covered in yellow flower vines. 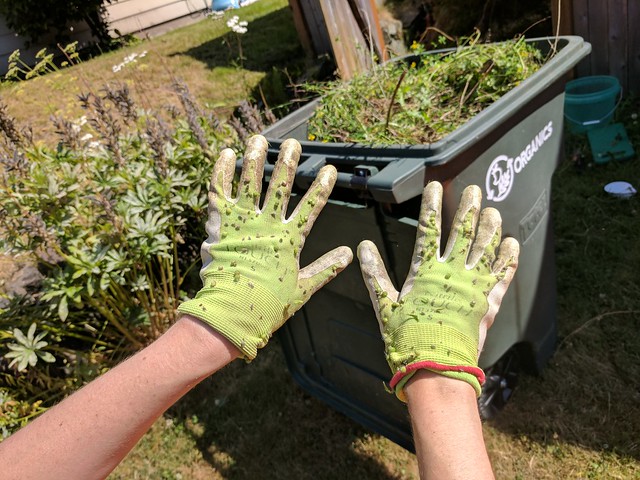 Those are my gloves after I stopped, but I had been picking burrs off at regular intervals, so that’s not the total accumulated amount. Next time I’m going in with jeans, long sleeves tucked in, and a face mask. Seriously.

I don’t know when I’ll get back to finish the assault, but still more of that darn vine remains. I will not rest until it’s eradicated from my yard! …OK, I will rest, but I will also keep pulling vines now and again.